Twitter Billboards Show How We Coped With the Horrors of 2020 by Tweeting About It, of Course

Twitter Billboards Show How We Coped With the Horrors of 2020 by Tweeting About It, of Course 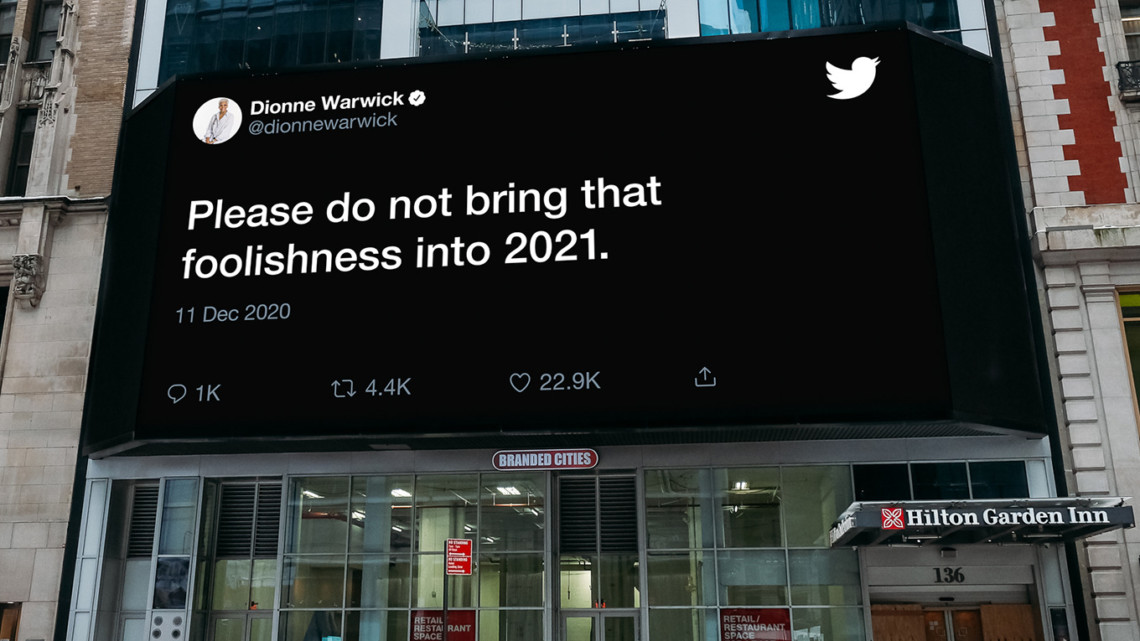 We haven’t been able to see family and friends in person, go to the movies or grab a drink at a bar for most of 2020. But, at the very least, we were able to tweet about this endlessly nightmarish year.

Twitter is celebrating the year ending with an out-of-home campaign that leans into the idea of “tweeting through the pain” by showing real tweets from users who chose humor to cope with the many horrors this year delivered. According to the brand, there were more than 6 million tweets about 2020 to choose from.

“In light of everything that’s happened this year, we are excited to amplify the humor and levity that people brought to Twitter,” Robin Tilotta, director of marketing at Twitter, said in a statement. “These are the tweets that connected and uplifted us, and we hope people join us in celebrating the end of 2020.”

Warwick, in particular, has recently taken Twitter by storm with unfiltered takes about everything from Chance the Rapper and The Weeknd’s stage names to questions like asking Jack Dorsey if she’s the CEO of Twitter. While some have questioned whether it’s really Warwick tweeting from her account, the singer recently set the record straight.

A Twitter spokesperson said the brand ideated the campaign internally, and opted to highlight tweets from a mix of people that offered a variety of comedic takes on 2020, showing the ways people brought joy to the platform during a challenging year.

[email protected]
Ian Zelaya is an Adweek reporter covering how brands engage with consumers in the modern world, ranging from experiential marketing and social media to email marketing and customer experience.

About the Author: Ian Zelaya